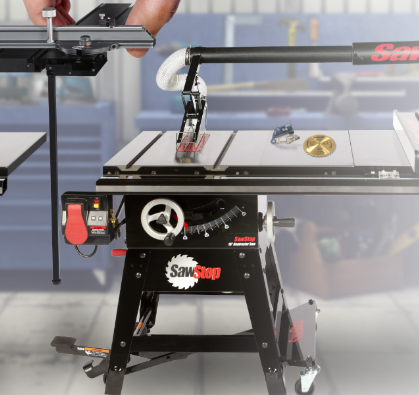 SawStop is the maker of the only skin-detecting table saw. In 2004, the first SawStop Table Saw was sold. Since then, their saws have saved thousands of fingers and their business has experienced exponential growth. The combination of safety, unparalleled design, and craftsmanship has made SawStop the #1 cabinet saw in North America.

As the company expanded, so did the complexity of reporting and information requirements. Patty Terrazzino, Sales Operations Manager for SawStop, comments, “Inventory Management became more complex. We use an ERP along with Tableau, but couldn’t get the reports out of these systems in the fashion we needed. On top of this, we had manual processes to track hundreds of parts. We needed a business intelligence system to collect data and allow us to view it easily.”

Patty turned to DataSelf for help. According to Lori Wright at DataSelf, “They were needing to calculate their purchasing for component items but the Sales History and Open Sales Order reports give finished goods. So, we reverse engineered SawStop’s BoM recipes to “explode” the Sales and Sales Orders into their component parts. Even though some of the components are themselves assembled BoM’s, by going several layers deep, we broke through the barrier and let SawStop get a full read on their inventory.”

Patty comments, “We are known for having stock, but the micromanaging processes we had back in the day no longer worked. Having our data translated, calculated, and delivered on one report excites me and opens the door for growth we can sustain.”

In addition to improved reporting and better inventory visibility, Patty is amazed at the time savings. “Having DataSelf automate inventory reports has saved us time and money. It’s tough to quantify this but I know the savings are big! What used to be a manual and laborious task is now easy and automated.”

David Fulmer, Special Counsel for SawStop said, “Reports that would have taken hours of manually manipulating ERP exports take just a fraction of the time. The same with GL reports.”

Patty added, “We have more than doubled in size over the past 10 years and DataSelf has helped us repeatedly. Anything we throw at their team, they figure out. They help us analyze our data and present it, so we can find answers. It’s not always a simple solution to know the best way to view data, but DataSelf stays with us until we get what we need, and we highly recommend them.”

Joni Girardi, DataSelf CEO comments, “We work with many impressive clients, and SawStop is one of them. Their world-class products and commitment to excellence sets them apart. I am grateful that DataSelf Analytics is one of the tools they use to save more fingers.”

A business as robust and healthy as SawStop doesn’t remain a secret for very long. SawStop was recently acquired by another company, a move that solidified its position as a top manufacturer.
During the acquisition process and negotiations, SawStop produced reports that wowed the acquiring company.

David commented, “When the acquiring company asked us questions, we were able to produce such detailed answers that they had exactly what they needed at a moment’s notice. It was a great time saver.”

DataSelf may have won another fan in the process. “The Controller from the company that acquired us is working with us and loves DataSelf. The reporting available to him makes his job easier because he can make his own reports,” said Patty.

Time saving features, detailed reports, and ease of customization enabled SawStop to provide the information needed to close their acquisition deal. Where will DataSelf take you?

DataSelf Corp. provides turnkey business intelligence and analytics solutions to mid-sized organizations. From basic dashboards to complex reporting, DataSelf’s solution is scalable and integrates with dozens of ERP and CRM systems including Acumatica, Sage, Microsoft, Salesforce, NetSuite, Infor, QuickBooks and Everest. DataSelf focuses on empowering key stakeholders through the visualization of critical data across their business.