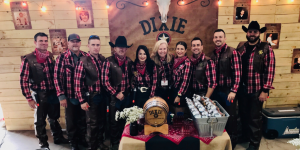 The saying “healthy things grow” is a great representation of Dixie Carpet Installations, Inc. After operating for 49 years, their commitment to improving business by finding new insights through the power of data has never wavered.

The Missouri City, TX-based flooring company offers carpets, vinyl tile, and vinyl flooring through its five branch offices covering the Houston, Austin, Dallas, San Antonio, and Corpus Christi metro areas. As a family-owned business, Dixie Carpet earned its solid reputation by offering quality products at a competitive price and with consistently outstanding customer service. Most of its customer base are repeat customers, and Dixie Carpet is proud of the long-term relationships it has built with its clients.

But in the six years that Greg Washko has been with Dixie Carpet as Executive Vice President, he knew that the company would continue to expand its locations and increase its profitability only if he could easily and quickly get the data needed to inform his store managers about any customer trends or operational inefficiencies.

The ERP/Automated Service system Dixie Carpet was using was “great for running our overall business, but it was difficult and slow to get the reports we needed to make our company more profitable and grow to the next level,” Washko says. With this system, running a report could take 10-15 minutes and was cumbersome to get the exact data he and his store managers needed. “I would have to plan my schedule around running these reports, and it was hard to hold management accountable when we needed to run reports on forty salespeople that would take days to complete,” he explained. Then Washko was introduced to DataSelf by Ascent Business Systems, developer of Automated Service, and he was immediately impressed that it would be the right solution for Dixie Carpet.

In late 2017, Washko discovered DataSelf and invested in its Core Financials and Distribution templates. After the initial software demo, Washko reports that he was “sold.”

“DataSelf was exactly what we needed,” he says. “I was impressed by its flexibility to look at our data from multiple angles, easily select what we needed, and by how user friendly it is. But more important is how fast we can now run reports with DataSelf. What used to take 15 minutes now takes 2 seconds. From the initial demo, I knew that DataSelf was cutting-edge advanced software that is ahead of any other BI software out there,” says Washko.

Dixie Carpet is currently in Phase 1 of its DataSelf implementation that includes running reports on meaningful metrics for its five (soon to be six) branch locations. Because DataSelf runs on the cloud, store managers can easily run the reports they need and share data across all locations.

“DataSelf is so intuitive that it took only one time to train my managers on how to run the reports they need and they took it from there,” says Washko. “These reports show if there are any inefficiencies in their stores and gives them the information they need to fix or fine tune their operations.”

One of DataSelf’s features that has most impressed Washko is how easy it is to customize data to get exactly what you want – when you need it.

“I like how DataSelf lets us change what data fields we’re analyzing, what columns of information, and be able to analyze our data in the exact way we’ll use it,” he says. Before DataSelf, IT would need to create these custom reports and it would take time to get them into the managers’ hands. “Now with DataSelf, it truly is self-service BI.”

The next step for Dixie Carpet is what Washko refers to as “Phase 2” – creating dashboards. Now that the entire company has embraced DataSelf and managers are comfortable running their custom reports, the next logical step is creating dashboards of key metrics that appear as soon as his team logs into the system.

“We’re defining what metrics we want to track by what time frame – whether monthly or daily – and will create automated dashboards that provide greater visibility into our data,” says Washko.  “That way we can fix problems quickly. For example, we might monitor certain long-term customers and, if we see their usage drop off over time, we can proactively address this and save the account.”

“DataSelf has paid for itself, plus more,” says Washko. “It has been a real game changer for Dixie Carpet.”