Home/Blog/DataSelf Templates – Who needs 5,000 KPIs? No one, really! 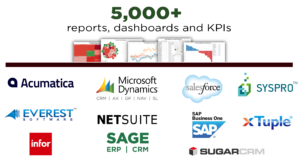 As of Aug 2017, we offer 5,000+ reports, dashboards, and KPIs for analyzing initiatives such as AP, AR, financials, inventory, PO, sales, opportunities, and support cases.

The CFO of one of our current clients told me: “In my prior job, it took months of IT validation before I was able to access DataSelf. I then quickly found out major issues by exploring canned KPIs. It was so invaluable! However, many of the KPIs were working even before the validation. So, I lost months flying blind! For my new project, I want access to DataSelf ASAP, so I can decide which KPIs are ready and what validation and custom work is important.”

It was an enlightening perspective! Since then, we focus on putting decision makers in the BI driver’s seat as early as possible! Our out-of-the-box solution can make that happen in a matter of hours.

A prospect told me, “I don’t need 5,000 reports, I need 20—and I’m sure you don’t have them.” He said he needed a report showing average sales by product in a four-month moving window. I found such a canned report but for a three-month window. In seconds, I changed it to a four-month window and said, “Now I have 5,001 reports, and one of yours is ready!” That closed the sale.

We found out there are a lot of similar reports used by many organizations. So, instead of creating reports from scratch, our clients can focus on analyzing their data right away by cherry picking canned KPIs or easily customizing them as needed.